Icon – a term that is often overused. In reality, there are only a few true icons. For example, the minimalist industrial products from Braun and Apple, the stylish “Danish Design” lamps from Poul Henningsen, and the Bauhaus style of architecture and design. When it comes to automobiles, the “Bulli” is an icon. But what exactly does it mean to be an icon? We take a look at the history of the “Bulli” – and delve into non-automotive disciplines. Dieter Rams is Germany’s best-known functionalist industrial design and is world-famous. He designed iconic products for Braun, including the T3 pocket radio in 1968. 40 years later, this hit design inspired Chief Design Officer at Apple, Jony Ive, to such an extent that he used it as the basis for the first iPod – the precursor to the iPhone. Rams views good design as being innovative, purposeful, aesthetic, user friendly, well thought out, honest, and environmentally friendly. Good design is as little design as possible. This is summed up in his guiding principle: “Less but better.”

In the world of modern mobility, this means that automobiles should also be functional – and the new ID. Buzz is precisely that. As a high-tech “Bulli” with the latest generation of software, it can be transformed via over-the-air updates and upgrades. With a state-of-the-art UI/UX (user experience), it is reduced to the essentials, and thus progressive, when it comes to useability.

Or, in the words of Poul Henningsen, the inventor of the PH5 lamp for Louis Poulsen in 1958: “Future comes by itself, progress does not.” This approach has also been taken with the new ID. Buzz.

Icons set the pace of our time
In conclusion, icons are long-lasting, high-quality products. Functionality and aesthetic go hand in hand. This is certainly true of the Volkswagen T1, or the “Bulli”, as it is lovingly known by its fans and devotees. One of the most legendary models in the history of Volkswagen, and in the automotive world as a whole.

But why? The “Bulli” combines versatile use, the feeling of freedom, and maximum use of space with a minimal footprint. A design philosophy also followed by the world-famous architect and founder of the Bauhaus school, Walter Gropius: “Architecture should reflect life and the times.” This concept is also applied in the new ID. Buzz. It is a companion in all situations – whether in everyday life, leisure time, or business High-tech “Bulli” with a rich history
The ID. Buzz develops and combines the most important automotive trends of our time and the characteristic features of the Volkswagen T1 van in a versatile and progressive “Bulli” – with an electric motor. However, compared to the 1950s, there are even more diverse demands on a modern “minibus for everyone”: the ID. Buzz is intelligently connected to its environment and boasts a host of assistance and information systems, which provide the technical prerequisites for automated driving – software is updated over-the-air, and charging is via Plug & Charge.

Not only has the ID. Buzz been meticulously thought out to offer the maximum use of space, it has also been lovingly designed with great attention to detail. One small example of this are the stylised silhouettes of the ID. Buzz, imprinted in the side trims and seat linings of the five-seater. An element reminiscent of the T1.

“The ID. Buzz has a revolutionary one-box-design. There is no other car like it.” - Albert Kirzinger, Head of Design, Volkswagen Commercial Vehicles As well as the inner values, design also plays an important role. For example, the exterior design of the ID. Buzz invokes aspects from the legendary T1. “A very special design feature of the ID. Buzz is the affection it is bringing back to the streets,” says Albert Kirzinger, Head of Design at Volkswagen Commercial Vehicles. Kirzinger is particularly keen to emphasise the proportions of the ID. Buzz, which make the vehicle so unique: “In the T1, I am practically sitting on the front axle – there is no overhang at the front. Nowadays, even with all the requirements in terms of safety and technology, the ID. Buzz still has an extremely short overhang. The same is true at the rear. This is the only car with this kind of one-box design,” says the designer.

As well as short chassis overhangs, many other characteristic features of the T1 can also be found in the new “Bulli”: maximum use of space with a minimal footprint, the division of the chassis design into lower and upper levels, and the unmistakable front with its V shape between the sharply defined headlamps.

But is that enough to become an icon? “For me, an icon is something definitive and universal,” says Kirzinger. “If we move away from the world of automobiles for a moment, and take a look at the field of architecture, what often makes a city so recognisable is its skyline. We can identify certain cities by individual buildings, such as the Elbphilharmonie in Hamburg, the Eiffel Tower and the Sacré-Cœur in Paris, and Big Ben in London.” 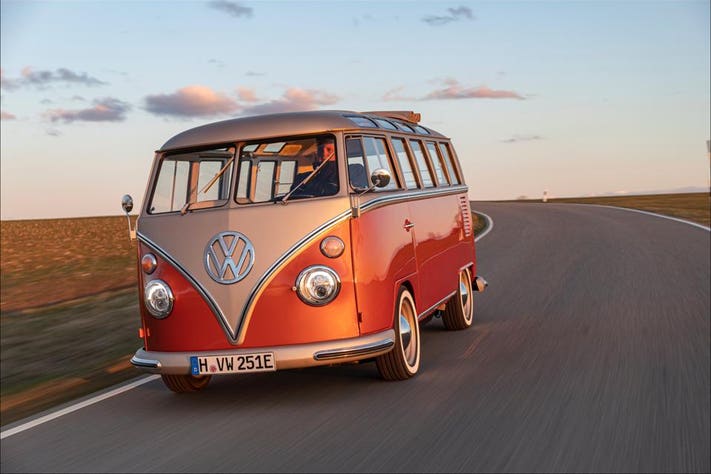 Be it consumer goods, technical products or architecture, Kirzinger draws clear parallels with the “Bulli”: “The design of these structures is so extraordinary and expressive that they are different to everything else. There isn’t much room for improvement when it comes to their form. However, a number of details can be developed without compromising the basic concept – which is also the key feature of the Volkswagen T1 van throughout the various generations. We have applied the same approach to the ID. Buzz.”

“The ID. Buzz is timeless and sustainable, while also being extremely functional – which is what makes it unique. But we were very intentional, so as not to simply build another T1.” - Jozef Kabaň, Head of Design, Volkswagen

Icon of the fully-networked electric and digital era
With the ID. Buzz, Volkswagen is championing electromobility, digitalisation, networking, autonomous driving, and new mobility and transport systems. These all come together in the new electric van – the most emotional member of the ID. family so far. Close to the concept study, which caused great excitement around the world, the ID. Buzz is more synonymous with freedom and individuality than any other vehicle. “The ID. Buzz is timeless and sustainable, while also being extremely functional – which is what makes it unique. But we were very intentional, so as not to simply build another T1,” says Jozef Kabaň, Head of Design at Volkswagen. 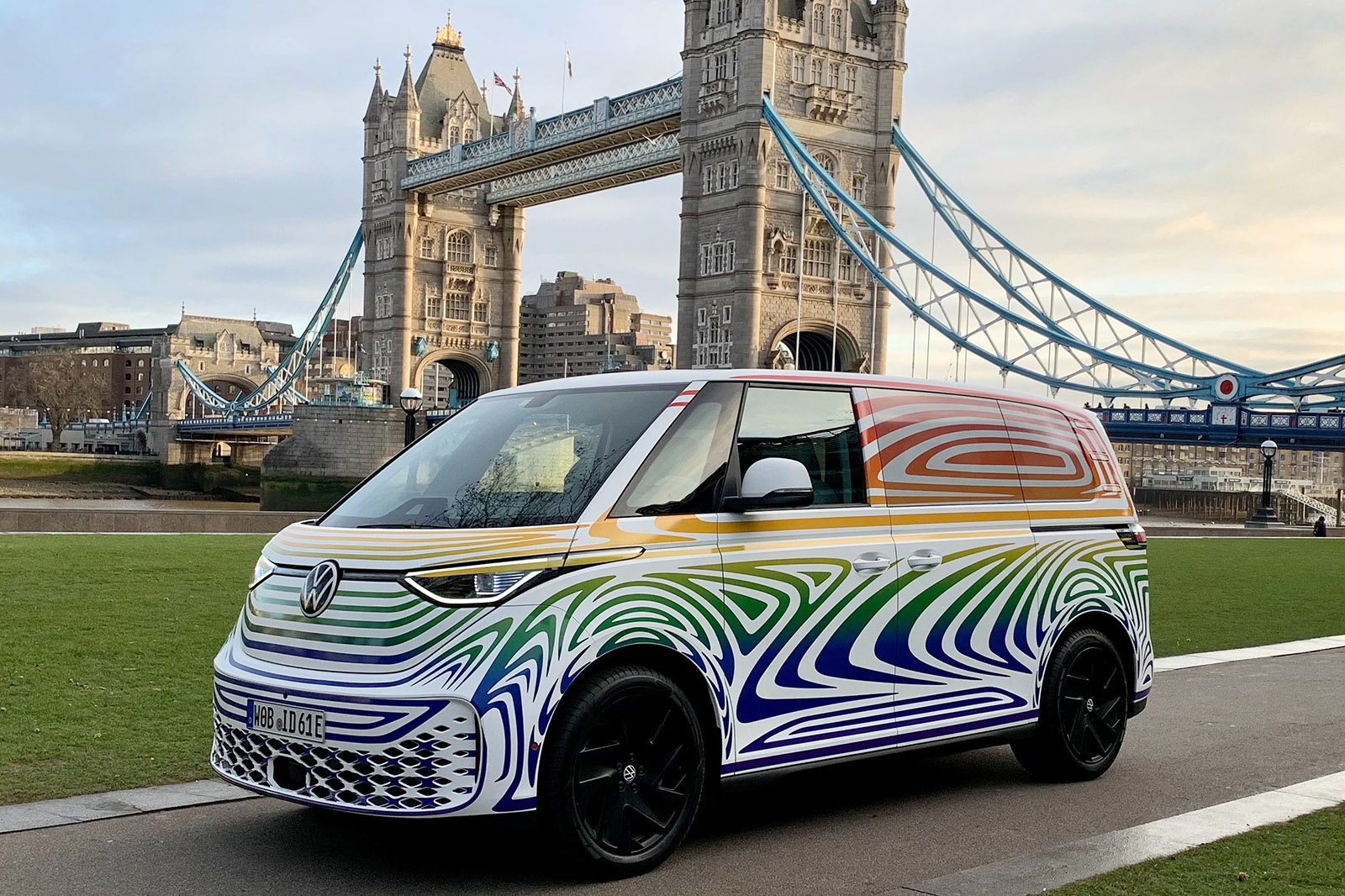 And so it is that the design of the ID. Buzz reflects the images of a grand history, stretching from the German economic miracle and the flower power movement, to one of the most successful series of vans in Europe: “The T1 – an icon of the 50s – is synonymous with the democratisation of mobility and freedom. With the ID. Buzz, we are transferring the DNA of the T1 to the present day, and thus into the era of electromobility and sustainability,” says Kabaň.

At the same time, with its unique DNA, the world’s first van and transporter in this class to be developed on an all-electric platform is also evolving into the new face of smart, future-oriented, sustainable mobility.