Share
0 comments
New Look at Will Smith’s The Heat Shows It’s Still the Most Luxurious RV in the World
Work hard, play harder. If you’re an A-list actor like Will Smith, you get to to do both in the most badass, biggest and most luxurious motorhome in the world, and the most unique movie trailer, The Heat from Anderson Mobile Estates.

The Heat is a monster motorhome, a landyacht like no other and, with a $2.5 million price tag, it’s also the most expensive RV ever created. It used to belong to Will Smith, who liked the prototype and had it customized in 2000 and then went on to use it as his movie trailer for years. Today, The Heat still claims to be the tallest, widest and most luxurious RV in the world.

At least, according to Ronald Anderson. Ronald – Ron, as he introduces himself in his most recent chat with Barcroft Cars for the Ridiculous Rides segment – is the founder of Anderson Mobile Estates, which is currently fronted by his son RJ. In 1987, Ron set up Star Trax Celebrity Coaches, which he ran until 1999, when he sold it and went on a sabbatical with the entire family.

This is when he found the inspiration for what would become the world’s only patented landyacht with a second story that would expand out of the first, which became the foundation of the new family-run company. The Heat, also known as The Studio, is the company’s first celebrity trailer and, for this reason alone, remains iconic. It is also the first to showcase this patented expansion system, in addition to four slide-outs and luxurious features you’re more likely to see on a real yacht.

Will Smith no longer owns The Heat, which went back to Ron, but it is still functional and can be had by anyone – as long as they have $9,000 to spend. Per night. The 22-wheel, 55-foot (16.7-meter), two-story RV offers 1,200 square feet (111.5 square meters) of living space, and incredible amenities that are, we assume, standard for a celebrity of Smith’s fame and wealth. It has a fully-stocked kitchen and dining lounge, a 30-person screening room that doubles as a conference room, a bathroom with sauna, running the entire width of the trailer, Star Trek doors, real leather throughout, granite countertops, real wood and marble.

Contrary to previous reports, it also has a master bedroom, which converts into an office when needed. A secondary office space becomes a make-up and hair station, with its own private entrance so the stylist won’t “intrude on the celebrity’s space,” Ron says. The mirror in this area hides one of the 14 TVs in the RV, so the celebrity can catch up on favorite content while the stylist does his or her job.

Without a doubt, the most spectacular aspect about The Heat is the expanding roof. Pop-up upper sections are not uncommon with trailers, though you’d be hard-pressed to find another example in an RV of this size outside of the products from Anderson Mobile Estates.

The second story is hidden within the first, but at the touch of a button, eight pistons push out the roof, raising it 42 inches (107 cm) and creating the upstairs level. Ron explains how even the door frame collapses onto itself when the roof comes down, so there was no room for error when designing this expansion. As he said in a previous interview, leave a metal candle holder out when the RV was folding down, and it would “impale” the roof.

The video below also offers a new, fresh view of the interior. It’s dated, alright, much like you’d expect for something built in the 2000s, but you can see it’s still lavish and custom-made.

The interior staircase and most furniture pieces are made of something called Oberflex wood, which is made in France from real wood veneer bonded to a laminate backing. It looks like solid wood but has the advantage of being ultra-resistant and scratch-free. As Ron puts it, you could run your keys throughout the entire trailer and you’d hardly cause any damage. Elsewhere, you will find genuine leather even on the ceiling, marble in the bathroom, and state-of-the-art technology. Not shown here is the print scanner outside of the bedroom, and a security system that can immediately detect an intruder and alert the celebrity and security, while sending a photo of the intruder to their phone.

The Heat is unlike any other RV out there because it was tailor-made for a movie star. We often hear about the outrageous or downright insane demands of celebrities, but the fact remains that their reality is a completely different from ours. Will Smith’s home away from home is a good example of that. 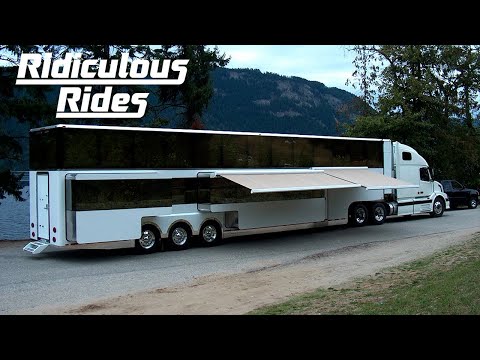