Rodger Dudding of Studio 434®, the owner of what is believed to be Europe’s largest private car collection, has always revered and admired the cars designed by the late William Towns. Rodger has a passion for one of William Towns’s classic designs, the Aston Martin Lagonda “Wedge”, a car that divides opinion but is certainly very striking and will turn heads when seen on the road. Rodger’s collection includes the first “Wedge” delivered to a customer and the last car produced by the company. 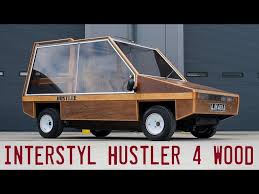 Rodger Dudding now has 25 classic Aston Martin Lagonda “Wedge” models based at his Studio434® locations in Potters Bar, Hertfordshire. His personal car collection in total is now over 500 models representing cars from the early 1900’s to the present day and reflecting largely British and European car marques and models. Rodger is a great admirer of William Towns car designs, he not only has what is believed to be the world’s largest collection of Aston Martin Lagonda “Wedge” models but also two other Bill Town’s designed cars the Hustler mini based models.

William Towns was a British designer who penned a small range of interesting cars.

He was born in 1936 and started his automotive career at the Rootes Group in 1954, initially as an interior designer working on mostly seats and other small components. He was then included in the team that started the design process for the range that became the Hillman Hunter – however he had left before that model reached the market.

The Studio434® collection does contain some very unusual, rare and collectable cars including one of the first Ferrari Dino’s produced and one of only two Railton models, the Claremont which is based on the Jaguar XJS running gear. In addition, Rodger has the world’s largest collection of the largely unknown Clyno marque, a British built range of cars, vans and motorcycles manufactured in the 1920/30’s but now largely forgotten. The collection also features some one off British cars including the AC 378 GT Zagato Prototype and one of the limited edition Jaguar XJ220 models.

Studio434® is a unique car, motorcycle and memorabilia collection location that is increasingly being used for corporate lunches and dinners, the available space at the second Studio434® location is being promoted for corporate events, sales meetings, conferences, exhibitions and shows.

Studio434® is one of the UK’s finest and most comprehensive private car, motorcycle and memorabilia collections. The vehicles in the collection range from the early 1900’s to the current day, including what is believed to be one the world’s largest collection of Aston Martin Lagonda “Wedge” models. The facility in two locations based north of London in Potters Bar, Hertfordshire and is available for private visits by car clubs and other organisations.