Like the entire Volkswagen Group, Audi is pursuing the vision of carbon-neutral mobility and wants to achieve net climate neutrality by 2050. The focus is on vehicles with electric batteries. In addition, Audi is increasing the environmental sustainability of its combustion engines: The company has now approved many of its current six-cylinder diesel engines for use with the renewable fuel HVO (hydrotreated vegetable oil). "With our 'Vorsprung 2030' strategy, we're pursuing the clearly defined goal that all new models we launch worldwide as of 2026 will be all-electric only. In this way, we're making an essential contribution on the road to carbon-neutral mobility," says Oliver Hoffmann, Chief Development Officer at Audi. "At the same time, we're optimizing our existing combustion engine portfolio for more efficiency and lower emissions. One way we're doing this is by creating the requisite technical foundations for the use of sustainable fuels such as HVO."

Renewable fuels, or reFuels as they are sometimes known, make it possible to operate combustion engines in a more climate-friendly manner. They are an effective means of defossilization – both in the short term and after 2033, when the last Audi with a combustion engine will roll off the production line in Europe.

Audi models with V6 diesel engines up to and including 210 kW (286 PS) that are leaving the company's factories as of the middle of February can be filled up with the HVO fuel in accordance with the European standard EN 15940. Hydrotreated vegetable oil (HVO) is a sustainable fuel that enables CO2 reductions of between 70 and 95 percent compared to fossil diesel. Another advantage of HVO is its significantly higher cetane rating, which means more efficient and cleaner combustion in comparison to conventional diesel. "As the cetane rating of HVO is around 30 percent higher, the combustibility of the engines is enhanced. The positive effects of this are particularly noticeable when cold starting. We tested the effects on various components, the performance, and exhaust emissions in specific validation runs before granting approval," says Matthias Schober, head of powertrain development for V-TFSI, TDI, and PHEV at Audi.

The most popular engine variants were prioritized to allow the maximum possible number of customers to use renewable fuels. 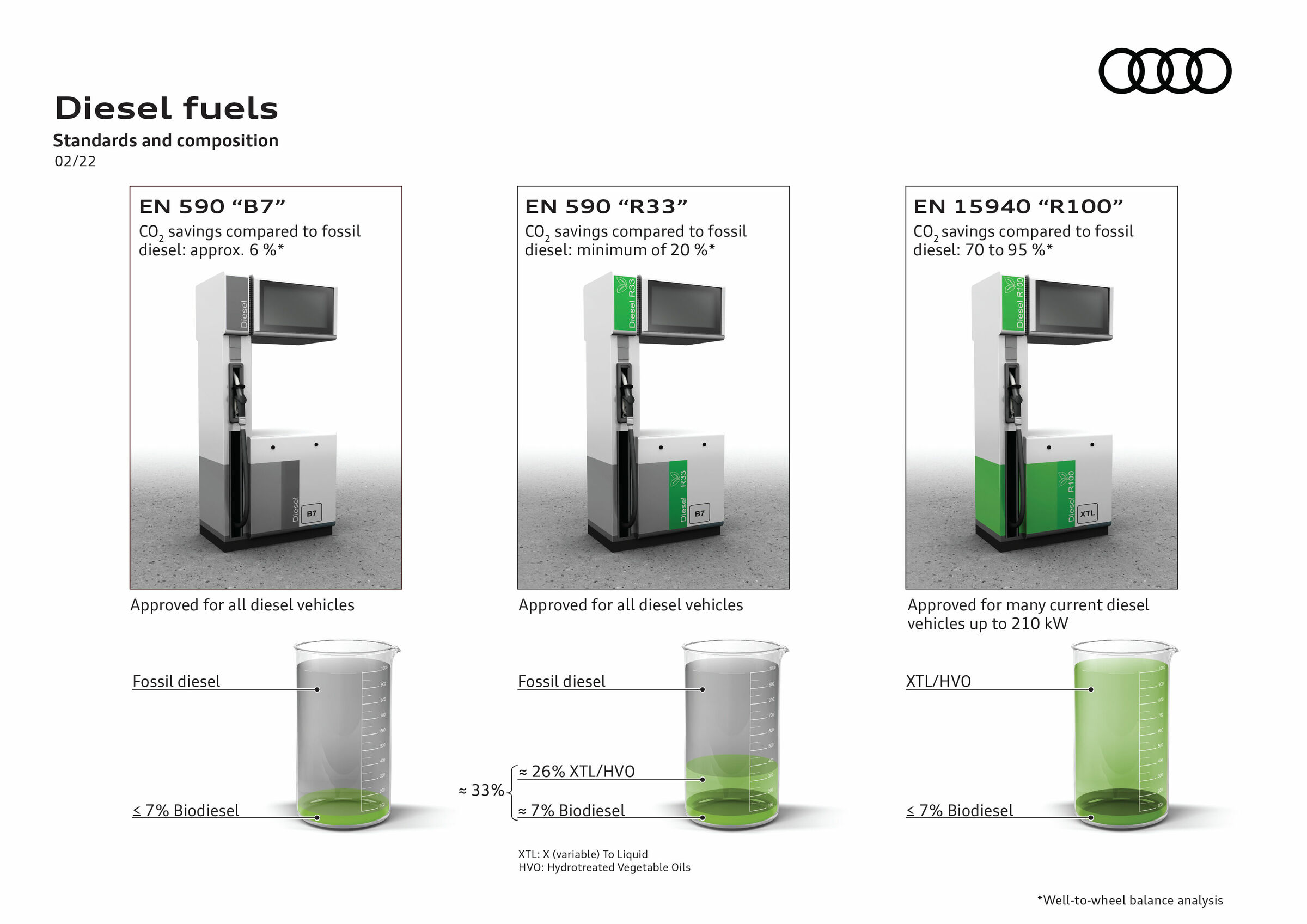 Biological residual and waste materials for HVO
Residual and waste materials, such as waste cooking oil from the food industry or residues from agriculture, are used in the manufacture of HVO. By incorporating hydrogen (hydrogenation), the oils are converted into aliphatic hydrocarbons. This modifies the properties of the vegetable oils to make them suitable for use in diesel engines. They can be added to conventional diesel, replacing fossil components, or else used unmixed as 100% pure fuel.

HVO is a so-called BTL (biomass-to-liquid) fuel. In addition to BTL, there are other manufacturing methods for synthetic diesel fuels, such as GTL (gas-to-liquid) and PTL (power-to-liquid). The latter can be obtained sustainably from renewable electricity, water, and CO2 from the atmosphere. As a collective noun for these fuels governed by EN 15940, the term XTL (X-to-liquid) is used, with the "X" standing for the original component. Fuel pumps containing these fuels are duly indicated using this symbol. Approved Audi models have an XTL sticker in the fuel tank cap.

In addition, HVO has been approved in Europe for the 4-cylinder diesel engines in the Audi A3, Q2, and Q3, which have been built since June 2021. In the models based on the modular longitudinal platform, the R4 TDI in the A4, A5, A6, A7 and Q5 series have been HVO-capable since the middle of last year in Sweden, Denmark and Italy, as market demand has been greatest in these countries to date.

HVO diesel is already available at over 600 filling stations in Europe – with most of them located in Scandinavia, where environmental requirements are particularly stringent. In Germany, only a few filling stations here and there offer HVO at present, although the trend is moving in the right direction. The reason for this is that the fuel standard EN 15940 has not yet been incorporated into German fuel-quality regulations (Ordinance on Fuel Quality and the Labeling of Fuel Quality – 10th Ordinance for Implementation of Federal Immission Control Act) (Verordnung über die Beschaffenheit und die Auszeichnung der Qualitäten von Kraft- und Brennstoffen – 10. BImSchV) – in contrast to almost all other EU countries.

Compatibility of combustion engines with renewable fuels (reFuels)
With various pilot projects, such as the power-to-gas plant in Werlte, Audi has acquired valuable insights into the manufacture of sustainable fuels, which are being utilized throughout the Volkswagen Group. These experiences are also an important basis for developing concepts for a general sustainable energy system. The VW Group is cooperating with mineral oil manufacturers and other energy suppliers and is contributing its technical expertise to ensure the compatibility of existing engines with reFuels.

Since March 2021, for example, environmentally friendly R33 Blue Diesel has been available at Audi plant filling stations in Ingolstadt and Neckarsulm. This diesel has a renewable component of up to 33 percent, based exclusively on residual and waste materials. R33 has two major advantages: Firstly, it reduces CO2 emissions by at least 20 percent compared to fossil diesel in the well-to-wheel analysis. Secondly, it is a premium fuel that has a positive effect on wear and service life through special additives. R33 Blue Diesel fulfils the most prevalent standard today, EN 590, and is therefore certified for all diesel vehicles – even older ones. The Volkswagen Group played a significant role in developing the fuel and its expertise helped get the fuel ready for market. In addition to the plant filling stations at Audi and VW, the fuel is already available at some public filling stations. However, fossil diesel fuel with up to 7 percent biodiesel content is still the norm in Germany. This fuel is indicated by the symbol B7 at filling stations. Soon, R33 Blue Gasoline will also be available for gasoline engines – the gasoline counterpart to R33 Blue Diesel. Like the environmentally friendly diesel fuel, it can be used across the entire existing fleet.

For the future, Audi and the entire Volkswagen Group are planning to approve further combustion engines for renewable synthetic fuels, thus making a valuable contribution to defossilisation.